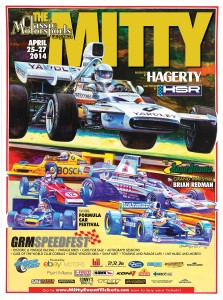 There’s a bit of Walter Mitty in us all.

Walter Mitty appears in the short story The Secret Life of Walter Mitty, written by humorist James Thurber and published in The New Yorker in 1939. Mitty is a meek and henpecked husband who daydreams of being a daring surgeon, heroic pilot and dashing naval commander. (“Throw on the power lights! Rev her up to 8500! We’re going through!”) Thurber’s story was a mere 2100 words long, but the character struck a chord and “Walter Mitty” has become popular shorthand for any timid soul who dreams of a more dashing life.

Most of us work out our Mitty angst by charging the biggest TV we get “afford” at Wally World.  Others?  They purchase vintage race cars — or should I say “adopt”? — and let it all out on the race track … before returning to the office bright and early on Monday.

The Mitty is recognized as one of North America’s most prestigious vintage racing events. Sanctioned by Historic Sportscar Racing (HSR), The Mitty attracts a diverse lineup of legendary machines from all eras and brings them back on track just as they raced in their glory years.

You’ll find a great lineup of cars that is sure to bring back memories.  Formula cars are the featured theme for The Mitty in 2014, and three-time F5000 champion Brian Redman will be on hand to serve as Grand Marshal.

The Mitty is more than just a weekend of racing, it is also a chance to spend time with fellow racing and automotive enthusiasts.  With special off-track displays and activities, The Mitty will again be a truly memorable event.

Be part of the excitement at Road Atlanta for The Mitty April 24-27, 2014.  But please be on time for work Monday morning.  Thank you.