Each Independence Day many people find themselves remembering Larry Burkett, a great man who went to heaven on the 4th of July in 2003.  Although we miss him, he will never be forgotten. 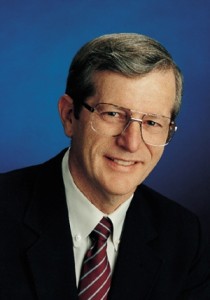 Larry Burkett was a great man.

As the founder of Christian Financial Concepts, based in Gainesville, Georgia, in 1976, Larry lived his faith in God and shared his substantial knowledge of the Bible.

He often said his message wasn’t any different than what our great-grandparents were taught:

Larry touched thousands of lives during the time he taught what the Bible says about money.  He led seminars around the country.  He sold thousands of budget workbooks.  He wrote many books — that became many more books when individual chapters were marketed as separate books by publishers.  Larry traveled the country speaking at churches and before large groups.

You may have heard his call-in program, Money Matters, or his short daily radio program, How to Manage Your Money.  Perhaps you remember how patient he was with every caller — even if he had heard similar questions 10,000 times before.

Hundreds of people were honored to serve Larry.  For about 15 years, I served in his broadcasting department.  My primary duty was to build relationships with people at hundreds of radio stations nationwide.  To a lesser degree, I helped write a few of his programs and the remarks that his co-host read before and after each program.

Several gentlemen in our department had the pleasure of traveling with Larry to his speaking engagements.  He suffered from pigmentary glaucoma and often required a friend to drive him from place to place.  That’s where I got to know him personally, when no one else was around.

Larry and I traveled to a large church in the Upper Midwest where Larry taught seminars on budgeting and biblical finances.  I remember the pastor’s name: Sam Mayo.

As we entered the church, Larry noticed two giant screens at the front of the church.  They made viewing the speaker easier if you were in the nosebleed seats.  Larry was supposed to sit up front.  But he chose not to.  Not because he condemned anyone who wanted to be seen on the Jumbotrons — just that he wasn’t comfortable doing so himself.

Larry refused to yield to the stardom that was his for the taking.  Larry wanted to go to church that Sunday morning, he didn’t want to be the center of attention.

I wanted our hosts to know Larry “was in the building,” so he permitted me to pass a note to the pastor, as Larry and I sat in the balcony watching from above.

During the service, walking smack-dab down the front aisle, a gentleman walked up to the pulpit and handed Pastor Mayo our note.  He read it, paused and said something like, “I am told Larry Burkett is in the congregation this morning. <pause> Everyone stand! <everyone stood> Now, turn to the person next to you and say, ‘Are you Larry Burkett?'”

Larry stood and asked those around him if they were Larry Burkett.  When they asked him the same question, he smiled, said, “Why, yes, I am!”  Pastor Mayo could tell all was well from the smiling folks in the balcony.

Larry’s writings won many awards, including “Book of the Year” from one large organization.  Once, when it was my turn to drive him to an event sponsored by one of his publishers, Larry entered a modest banquet hall and was greeted by a boisterously happy man who owned the company.

This kind gentleman hushed the crowd, introduced Larry and generously praised him.  Then the publisher grabbed Larry’s elbow and hustled him to the front of the buffet line.

A kind, generous gesture to honor his honored guest.

As Larry was dragged past those who were already standing in line, he looked each one in the eye and genuinely said, “I’m sorry!” or “Sorry, I know you were already in line!”

Larry could have sauntered to the head of the line with his head bobbling with pride.  Instead, he knew he was no better than anyone else in line and had no right to cut in front of them.  Had our host not had such a firm grip, I think Larry would’ve wrestled his way back to the end of the line.

When we got to our table that was overflowing with important people in dark suits and power ties or in red dresses with elegant coiffures, there was no room for me.  Larry simply said, “He’s with me,” expecting someone to give up his or her seat.  We worked that out and no one was bumped, but that’s who Larry was … and how those of us who knew him want to be.

Larry was invited to a giant booksellers convention in a giant arena in Atlanta.  It was my turn to drive.

We made our way to “Larry’s Table.”  High, quivering stacks of Larry’s publications were all around us.  A line of folks who had cheerfully chosen books from the table were waiting for him to autograph their precious copies.

My task was to keep the line moving, but not too fast.  I had enough pens to sign 8 gazillion books, enough water to replenish Lake Lanier after a dam burst and enough note pads to transcribe a dictionary by hand.  Just in case.

I asked the name of the first person in line what his/her name was and introduced him/her to Larry.  Then, I gave Larry their books, already opened and perfectly folded at the appropriate page for autographs, and confirmed what they wanted him to write.

We cranked out one book after another for hours.  Hours.

There was no possible way to guess how many people met Larry and had him sign and/or personally dedicate their books.  There were times when folks would say things like, “You don’t know how much you mean to me!  You saved my marriage!”  Larry never blew off such compliments, but he never fell for the trap of flattery either.

When our time at Larry’s Table came to an end, a lady walked over to us and said, rather frantically … well, I don’t remember her exact words to me.  Call it denial.

Let’s just say it went something like, “How many books did you give away?”  “Don’t you know the people had to BUY them before Larry signed them?”  “Who said you could GIVE THEM AWAY?”  She probably called me stupid, too, but I don’t remember.  Not as if she needed to convince me of the obvious.

Larry quickly and sincerely told her that “we” regretted “our” error and that “we” would do whatever it took to correct “our” error.  (I figured I had time to say goodbye to my wife and kids before Larry transferred me to his new office in suburban Timbuktu.)

The solution?  A formal, written apology and a promise to reimburse them for whatever they felt was appropriate to repay them for our mistake.  OK.  My mistake.

On a trip to the Washington, DC, vicinity, Larry spoke for two or three consecutive nights in a building teeming with nice people.  Each person wanted to meet Larry, have him sign something (no proof of purchase required) and ask him to give advice about their personal finances.

The teaching portion of the evening ended.  Some people left the building.  Most got in line to meet Larry.  Larry’s wife retreated to a warm car as the janitorial engineers began to close up for the night.  After a few lights were turned off, I made my move.

I strutted up to Larry during a momentary break in the action, grabbed hold of Larry’s elbow and bellowed to the crowd, “Thanks for coming tonight!  Larry’s had a long day and he won’t be able to meet with each of you tonight.  I’m sorry.”

That was the only time I remember (although there must have been others) Larry expressing anything like anger toward me.

All it took was just one look.

That’s when I knew it was time to unhold him, take my seat and be quiet until he asked me to do something for him.

An eternity of guilt later, Larry said, “Well, I see Robert is giving me the sign that it’s time to say goodnight, but we’ll be back tomorrow.  We’ll see you then.  Good night and God bless you.”

We never spoke of that mistake ever again.  Never had to.

Space won’t allow other examples of lessons we learned from Larry.

Larry would not want me to praise him for anything God accomplished through Larry and his hundreds of faithful staff members.

Larry would merely say that he was a simple man who believed in and obeyed a great God.

At the very least, we should remember that Larry Burkett was a great man who served an immensely greater God.