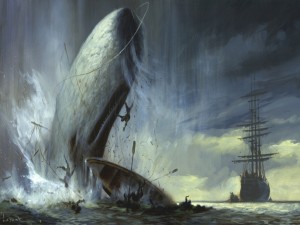 Almost every time I went out on Lake Lanier to catch bass with my friend Don Poole, the world’s worst fisherman, I would hear him yell (in a Southern accent that Goober couldn’t understand), “GAR!!!GAR!!!”

At first I thought it was some kind of genetic aberration he had inherited from his ancestors to frighten fish, so I tried to ignore him.

Until the day I saw — and caught — my first longnose gar on the northern portion of Lake Lanier on the Chattahoochee River.  Talk about a spooky fish.

Gar are about as thick as a thick tube and as long as your imagination can stretch them.  Their mouths are about nine feet long and they have zillions, maybe gazillions, of small sharp teeth that they want to use to chomp you and your loved ones to death.

If you’re on one of those long rowing boats used by the Lake Lanier Long Rowing Boat clubs, gar are even more scary because the gar swim alongside the boats that are about 1/4″ above the water, waiting to take a GIANT bite out of the arms, legs or whatevers of rowers. 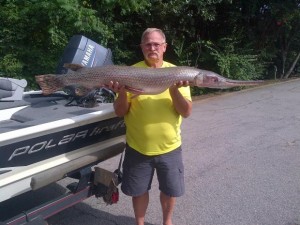 That’s why we wimps can shout “Hoo-RAY!!!” for what angler Gerald Kennedy, age 62, of Murrayville, GA, did on Wednesday, September 4, 2013 while fishing on  the Chattahoochee River arm of Lake Lanier — probably at the spot where I was attacked by a 45-foot gar that got away.

According to the Georgia Department of Natural Resources’ Wildlife Resources Division, Gerald caught a state-record gar that weighed 30 pounds, 13 ounces and was just shy of six feet long (58-3/4″).  This lunker beat the old official record by 9 ounces, held by Chad Leonard for his 30 pound, four ounce gar caught on the Alapaha River on September 5, 2008.

“It is so exciting to hear about a state-record catch as it reminds us that Georgia is such a fantastic place for anglers with its numerous fishing opportunities and resources, from big rivers and reservoirs to small neighborhood lakes,” says John Biagi, chief of fisheries for the Wildlife Resources Division.

Rowers, paddlers and skeered fisherpeople can rest a little easier, thanks to Gerald Kennedy.