Four young artists are winners of the T-Shirt Art Contest in Georgia’s Youth Birding Competition, according to Georgia’s Department of Natural Resources.

Art contest coordinator Linda May praised participants and stressed that the focus “isn’t just about art.”

“It’s about getting kids interested in the outdoors and connected to the environment,” said May, environmental outreach coordinator for the DNR’s Nongame Conservation Section.

“Birds are a great hook since they’re beautiful, abundant and easy to watch.” 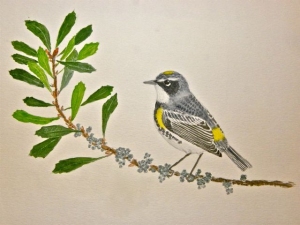 A yellow-rumped warbler drawn and painted by Decatur’s Angus Pritchard led all 121 contest entries.  As the grand prize winner, Pritchard, 14, a Renfroe Middle School eighth-grader, earned a $100 Michaels gift card and will have his painting featured on T-shirts at the Youth Birding Competition next month.

Angus Pritchard has been a regular in the art contest and the birding competition – including as a member of the winning team in 2013.  His art entry this year also placed first in the Middle School Division.

The T-shirt Art Contest is part of the Youth Birding Competition, an annual event in which teams of children and teens try to find as many bird species as possible throughout Georgia in 24 hours.

This year, the free bird-a-thon begins at 5 PM on Friday, April 25th and ends at 5 PM on Saturday April 26th at 5 PM.  Closing ceremonies will be held during a banquet at Charlie Elliott Wildlife Center near Mansfield.

All youth, from birding newcomers to veterans, are encouraged to register.  The deadline is March 31.

As Linda May knows, research shows the benefits of youth spending time outdoors, from enhanced learning to improved communication skills. But it’s even more exciting when the birding art contest helps make that connection.

“I was so thrilled to hear one parent say that this art contest piqued her daughter’s interest in nature, and how she now plays outside more and goes birding for fun!” May said.

Contest entries will be displayed and division winners honored during the awards banquet April 26, 2014 at Charlie Elliott Wildlife Center.