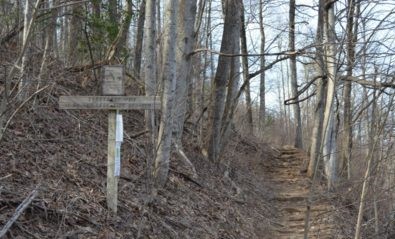 We regret to inform you that Ronald S. Sanchez, Jr., was slain on the Appalachian Trail in Wythe County, Virginia early in the morning of Saturday, May 11, 2019. His accused attacker has been apprehended and is in jail.

This website is dedicated to the sublime Lake Lanier, near Gainesville, Georgia. This area is known around the world for being The Poultry Capital of the World and for hosting canoe and kayak events during the 1996 Olympic Games. Gainesville is also the gateway to the gateway of the southern terminus to the Appalachian Trail (AT) on Springer Mountain.

The Appalachian Trail is simply a narrow dirt path that transports hikers from Georgia through fourteen states to their soulful conclusion atop Katahdin, a mountain in Maine’s Baxter State Park about 2,180 miles away.

Inquiries about how to get to the Appalachian Trail from Gainesville are incessant on popular AT pages. I always suggest Ron Brown — shuttle driver and Trail Angel — for his reliability, knowledge and wisdom. These days, questions about the Trail are focused on rumors of a hiker murdered on the AT, a terribly rare crime.

The Appalachian Trail Conservancy, based in Harpers Ferry, West Virginia, oversees and manages the AT on behalf of and in conjunction with the federal government. Here are their comments from May 14, 2019.

“The Appalachian Trail community of hikers and volunteers is profoundly saddened by the horrific attack Saturday morning on two hikers as they took their ‘journey of a lifetime’ along this beloved footpath,” says Suzanne Dixon, president of the Appalachian Trail Conservancy (ATC).

She continued, “The Appalachian Trail is a safe environment, a refuge that welcomes more than three million users a year. Unfortunately, like the rest of the world, the trail is not absolutely safe from evil.”

“The ATC extends its deepest condolences to the family of Ronald Sanchez and prays for the fullest possible recovery of the hospitalized woman. Those feelings extend to all hikers and volunteers who are scarred in some way by this attack on a place they cherish and care for every day,” she concluded.

The ATC — a private nonprofit, the members of which conceived and blazed the A.T. in the 1920s and 1930s — manages and conserves the 250,000 acres of public lands that comprise the Appalachian National Scenic Trail. It undertakes this in cooperation with the National Park Service, the USDA Forest Service, 14 states from Maine to Georgia, and 31 affiliated local clubs. The clubs are home to most of the 6,000 volunteers who maintain the footpath and its facilities through about 250,000 hours of work annually.

The attacks took place on Forest Service lands in southwest Virginia, the current location of the main “bubble” of about 3,000 persons attempting to hike all the way from Georgia to Maine this season. The southern end of the Trail is about 550 miles from the scene of the assaults. The Trail became a unit of the National Park System in 1968.

The person accused of the crimes, and other disturbances that were not deadly in Tennessee, is James L. Jordan, 30, of West Yarmouth, Massachusetts. He has appeared in Federal Court in Abingdon, Virginia, and charged with one count of murder and one count of assault with the intent to murder. The crimes took place on federal land; therefore, the FBI is involved in the continuing investigation.

The victim who was murdered has been identified as Ronald S. Sanchez, Jr., 43 years old, a U.S. Army combat veteran with 16 years of service and multiple tours in Iraq. His name on the Appalachian Trail was “Stronghold.” The Washington Post said Sanchez was from Oklahoma.

A woman who chooses not to be identified was also viciously attacked in the incident when Sanchez’s life was taken. Too many details of that hideous attack are easy to find online.

We profoundly regret that these innocent hikers suffered any harm on the Appalachian Trail.

I suppose we can comfort those who suffer from this inhumane action, and those who endure similar or worse treatment.

One fine way to contemplate life and death is by walking it away and leaving your thoughts along the Appalachian Trail. In spite of this horrid publicity, it’s still more safe than the average shopping mall parking lot after dark.

Take a hike in honor of Ronald S. Sanchez, Jr. Be nice to someone along the way. Come back better than when you hit the Trail. Next time, bring a friend.